A Circle Comes Round 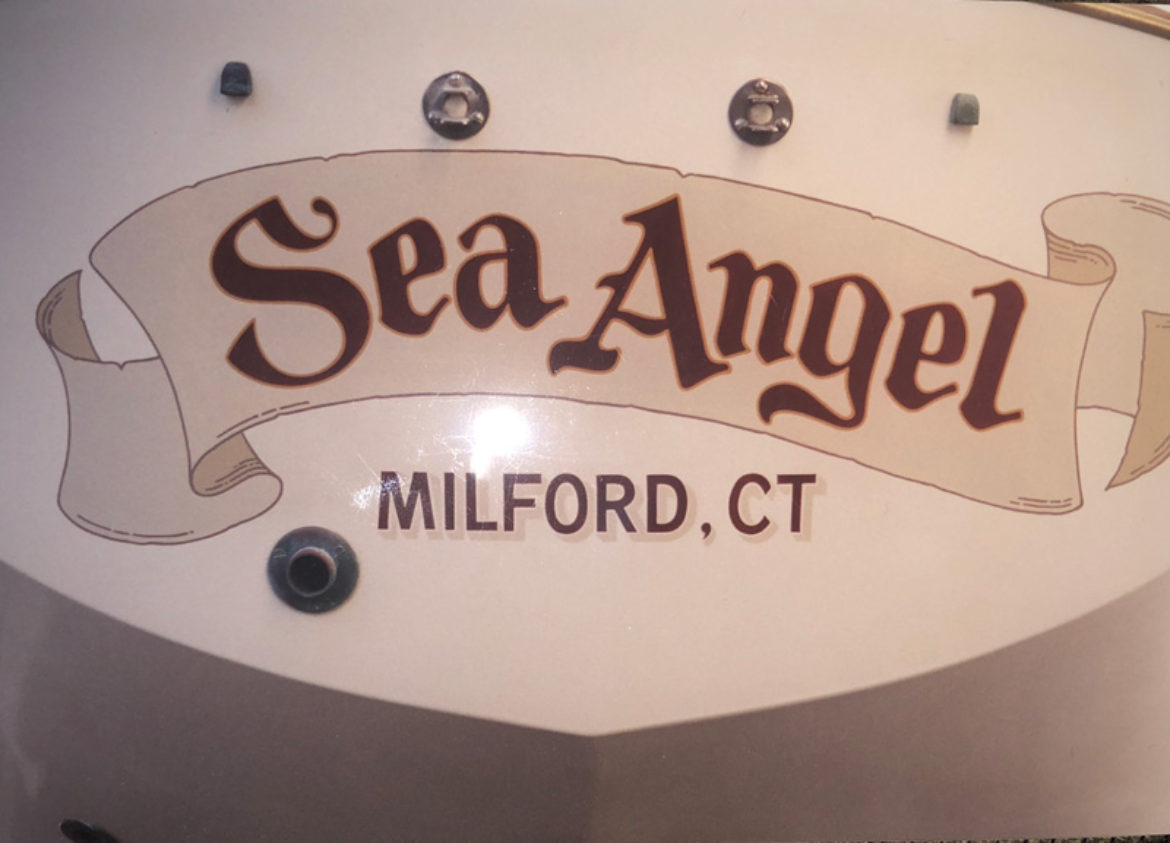 I got a call recently, a blast from the past. It was a client from 2000, back when I was still known to many as Sharon the Signpainter, owner of Sign It Sharon. The decorative artist I have become was still in her foundling stages.

Back to the call. It was the owner of the “Sea Angel”, a sailboat whose name I had lettered. 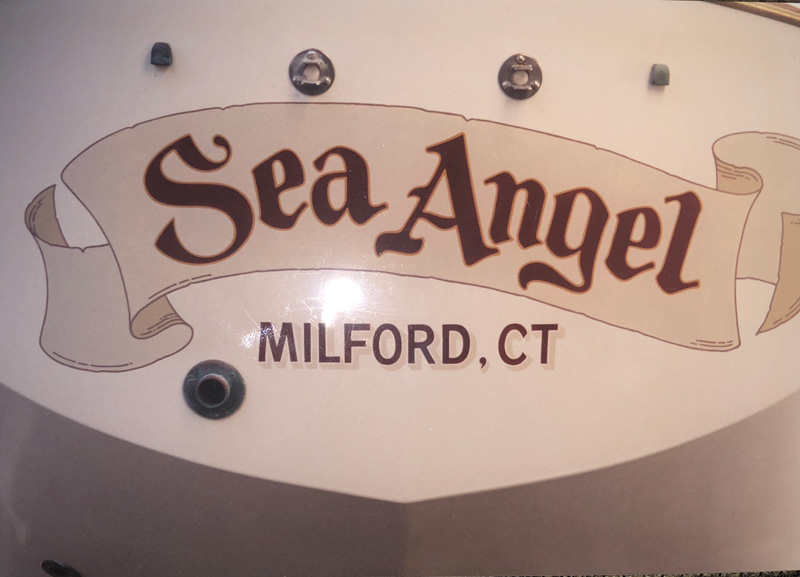 The work had a back story. I loved the design and the banner covered a ghost image from the name of a previous owner, which takes years to fade. It seemed that recent communications had gone awry and what was supposed to be a simple touch up to refresh the color and turned into a disaster when the banner was repainted a deep green. With the red hull, the transom screamed Christmas. With me being gone from the business, did I know anyone who could help.

And I did. Know someone. The perfect person who could solve her problem. Me, the original artist. Was it perhaps time for me to end my self-imposed exile from the world of signpainting for at least this one boat?

During boat lettering season, my world was at the mercy of the weather and tight schedules. When I became a decorative painter, there was no easy way to merge a different type of work schedule. It wasn’t going to be feasible to leave a mural when the sun decided to shine a few hours and I might be an hour’s drive away.

The sign business had given me exposure to a variety of work I enjoyed. With the help of my husband Hans and my Dad, my little shop fabricated wood signs, which were hand lettered. I did a ton of work for the Westfield Mall at a time when graphics were all painted by hand. Truck lettering, banners and gym floors, I painted them all. 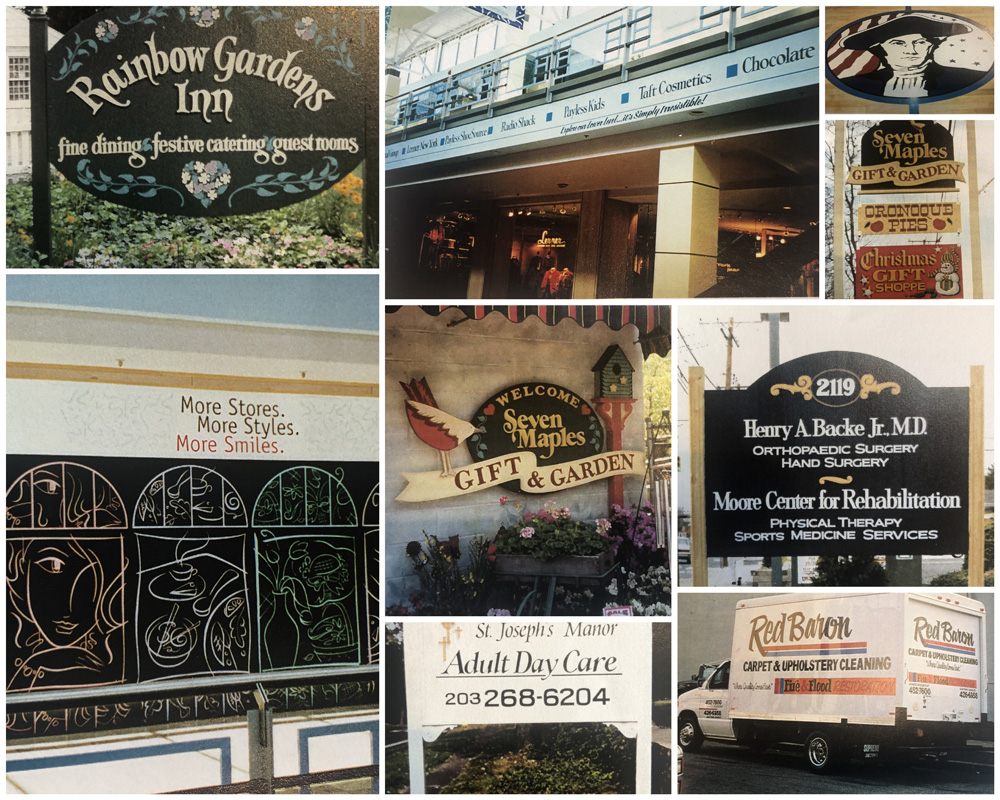 But my favorite work was the boat lettering. I’ve lettered hundreds. 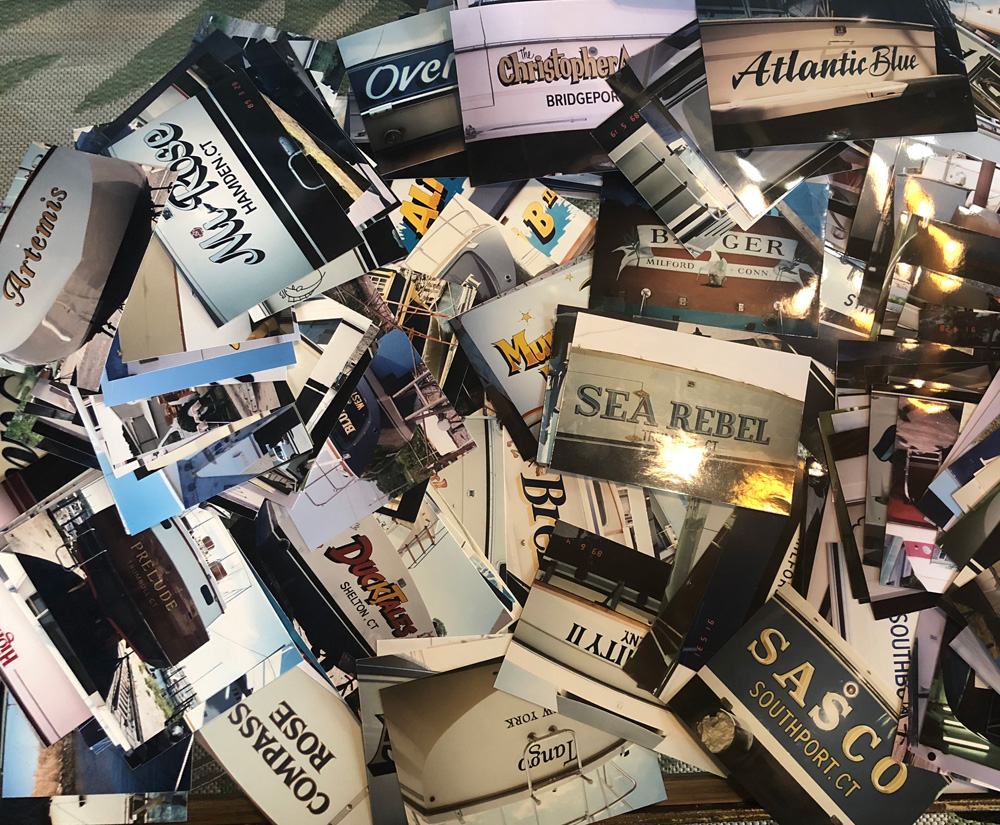 Here are some closeups of some of my favorites, all lettered by hand, no taping. 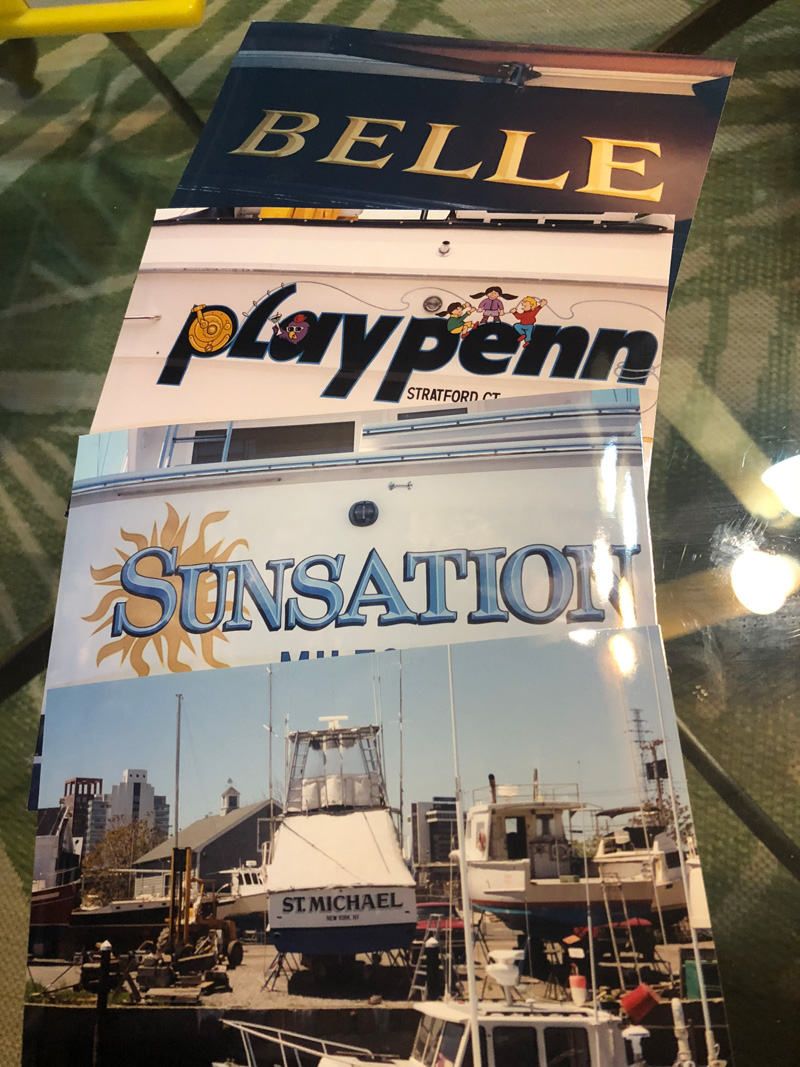 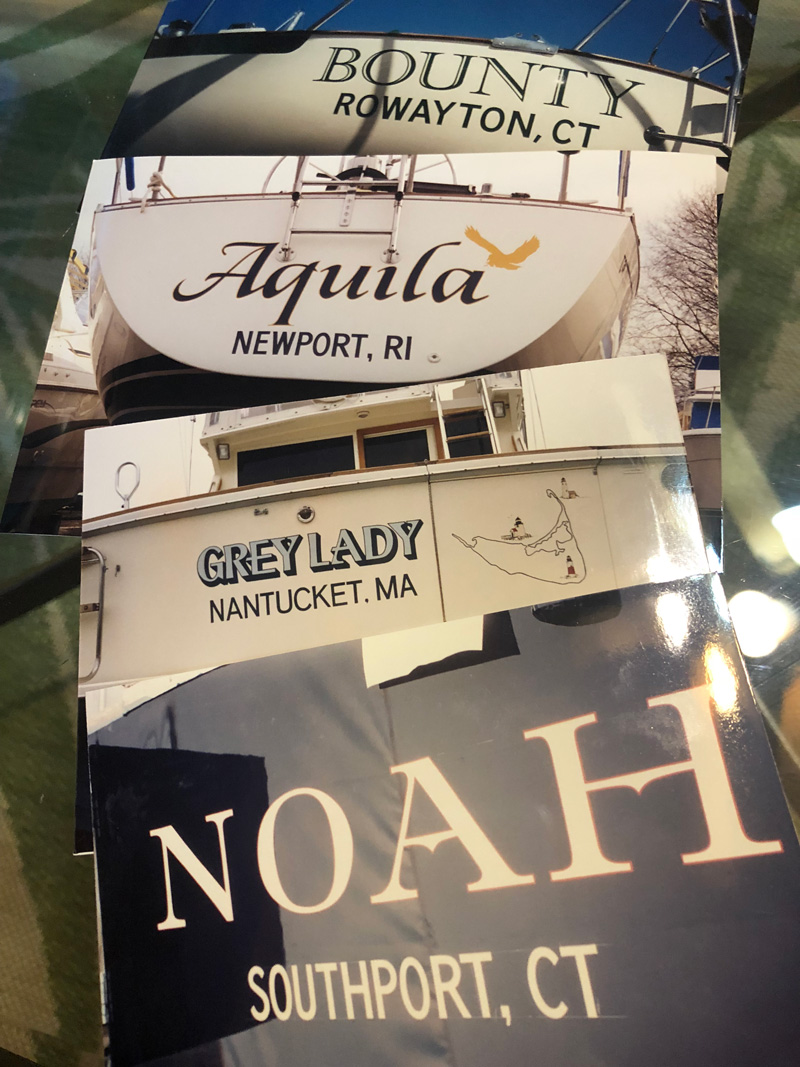 I did a tremendous amount of sign at Captain’s Cove Seaport in Bridgeport, CT. Here I am painting what I still believe is the largest model of the Titanic in the world. 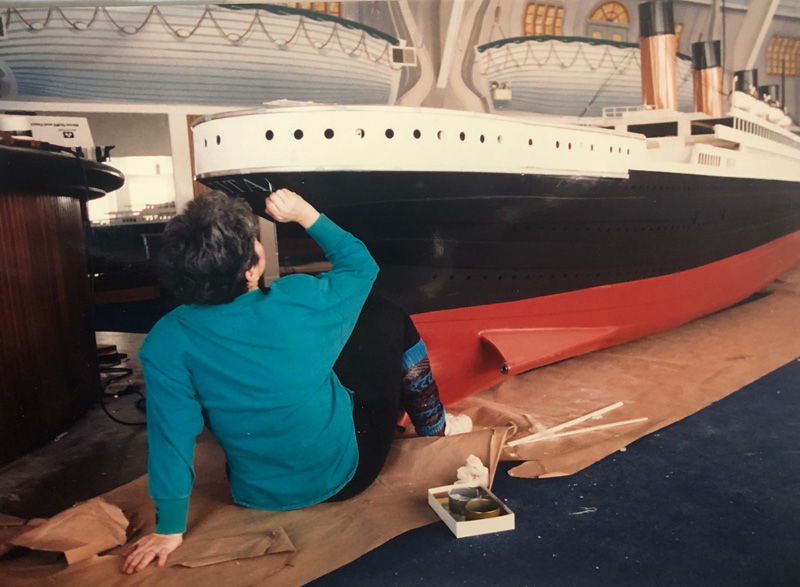 And so back to Sea Angel. When she is hauled this autumn, I’m going to restore her to her glory.

But it brought me to reminiscing to exactly how I put Sign It Sharon to rest, and why.

In the late 1990’s, I received a few calls from other artists who needed lettering added to their work. 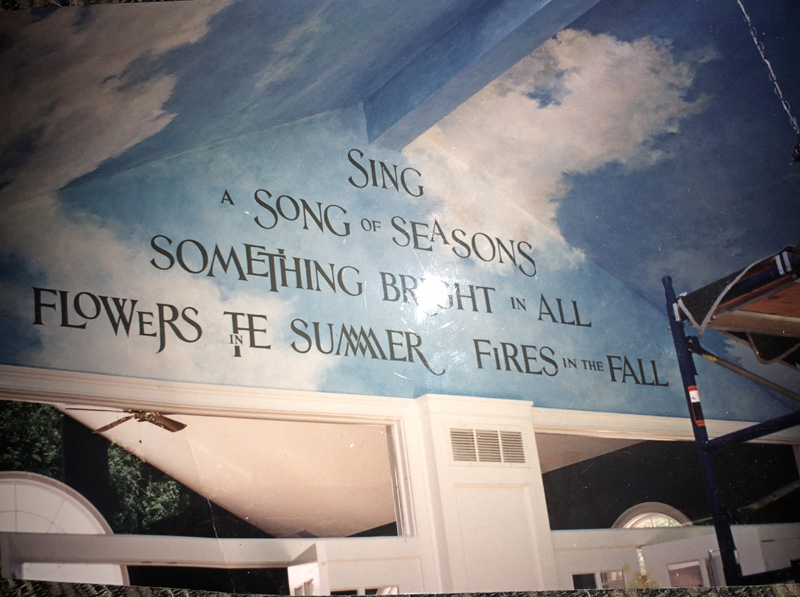 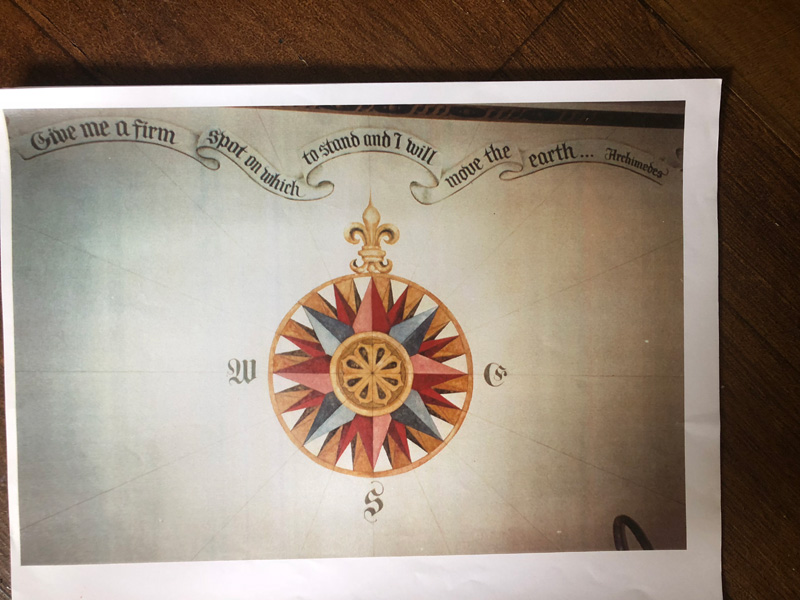 It opened my eyes to a whole new world, that of decorative painting. And the simple truth emerged, my little ego was having a hard time staying happy with the lettering crumbs of the projects. I wanted the whole thing. I wanted to paint! There were clouds I knew I could paint and murals spinning round my head. Had it taken me this long to see this? Seriously? Or was it just the realization that if I didn’t grab that brass ring I wanted, the chance was going to evaporate.

Could I have picked a worse time to come to this decision? Ah, probably not. My son was starting college, my daughter two years behind, and the awful truth that you can’t sell a sign business like mine. I am the business. You have to walk away. It took me the better part of three years of sixty to seventy hour work weeks to get Leichsenring Studios safe on its feet, while keeping Sign it Sharon alive to finance it. It was worth every exhausting hour.

Serendipity crossed my path with the talented Dyane Prezioso(www.shadeelady.com), a Shelton designer who gave me an opportunity to do work in a model home for a new development in Huntington, CT being built by the late( and great) Monty Blakeman. It was a chance to showcase my work to an entirely new audience every weekend the model was open. 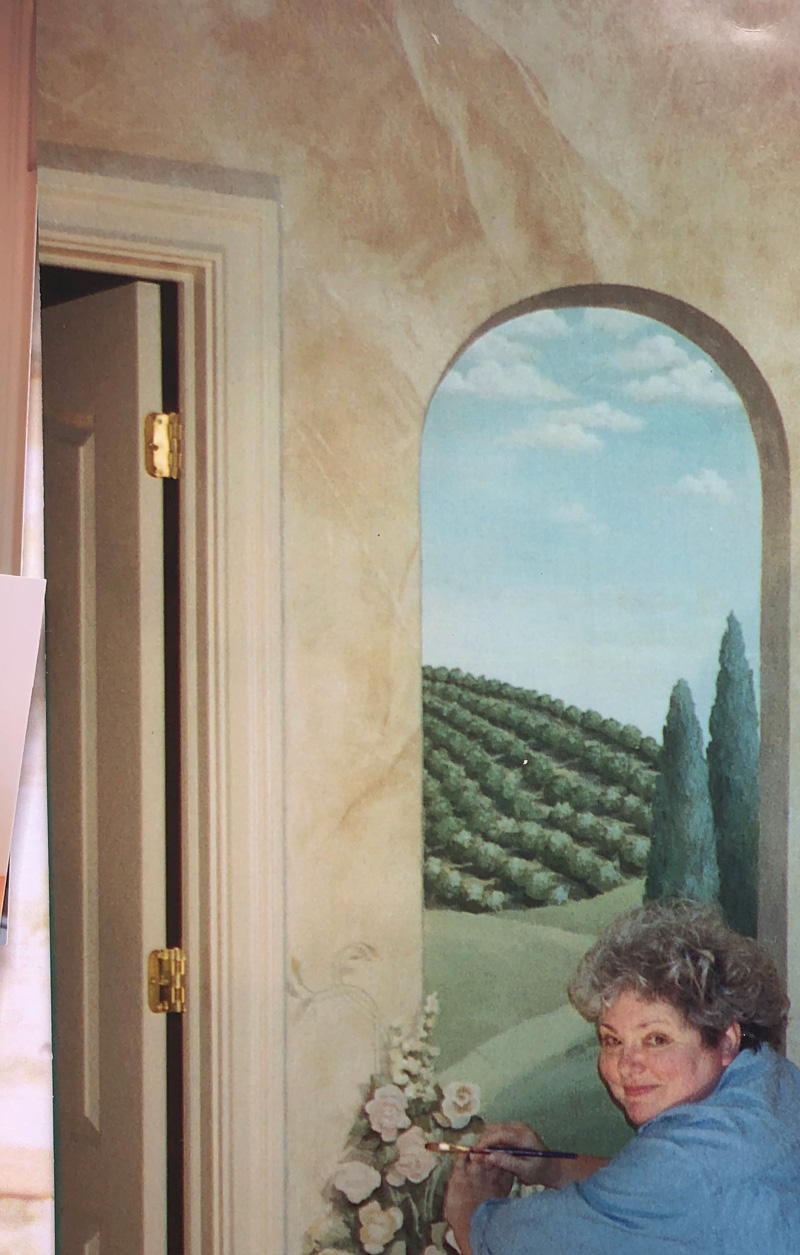 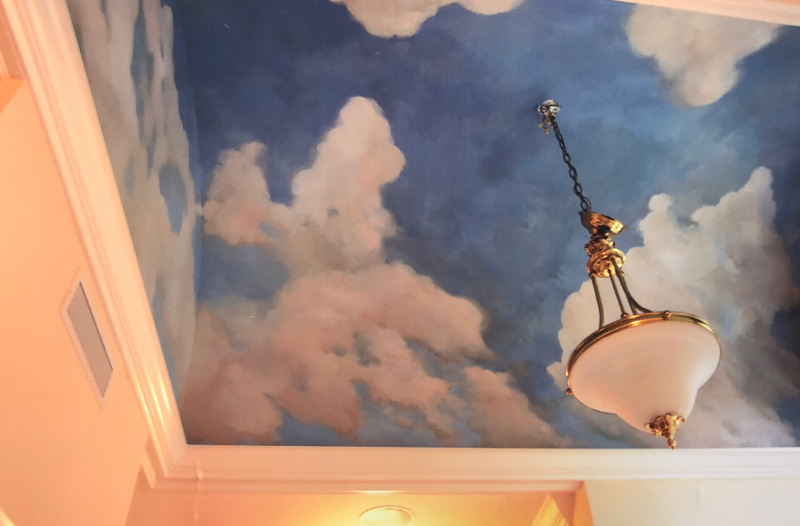 I have to admit, the work is well, a little primitive but that was my best twenty years ago. A little insight. When you start a second career as late as I did, you try harder. You become fierce in the pursuit to improve your skills because you don’t have time on your side. I’d like to think my work gets better every year.

And as Paul Harvey was wont to say: “and now you know the rest of the story.”