A House Touched by History 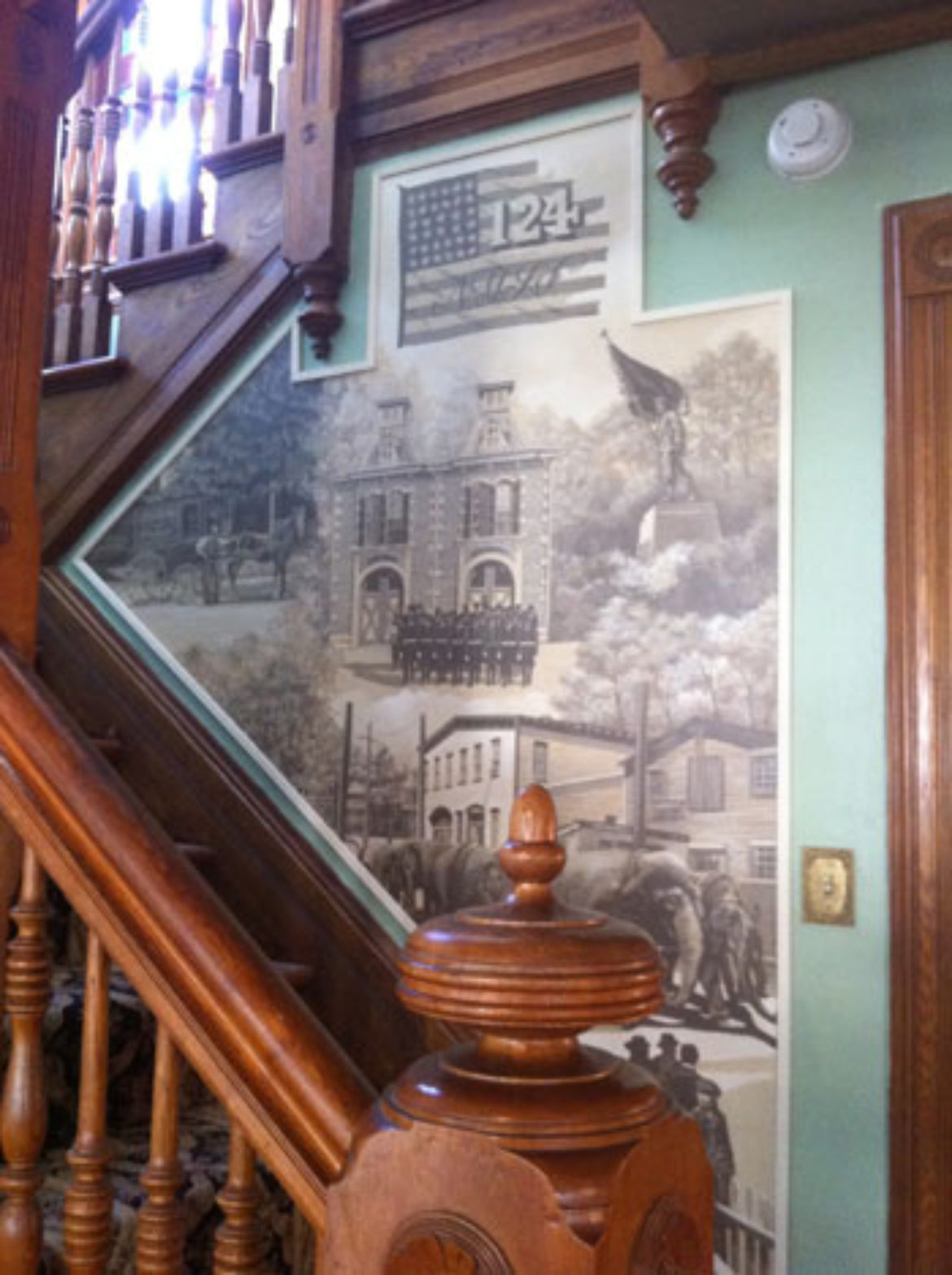 A Victorian house sits on a quiet street in Middletown, NY. The historic marker on the sidewalk in the only sign that hints to passersby of the rich history that is part of Middletown’s history.

When I first met with the owners, it was clear to me right from the start how challenging a project this would be. The owners have a clear respect for the value of their home’s history. Care has been taken to protect the original stained glass work. The intricate workmanship hails from another era. How then to combine all the subject matter that Middletown had to offer?

The Thrall Library was a treasure trove of information and old photographs. I also photographed some of the existing buildings and statues. I designed the mural in two sections. The work was done on wood panels and when completed, attached and framed to the wall. 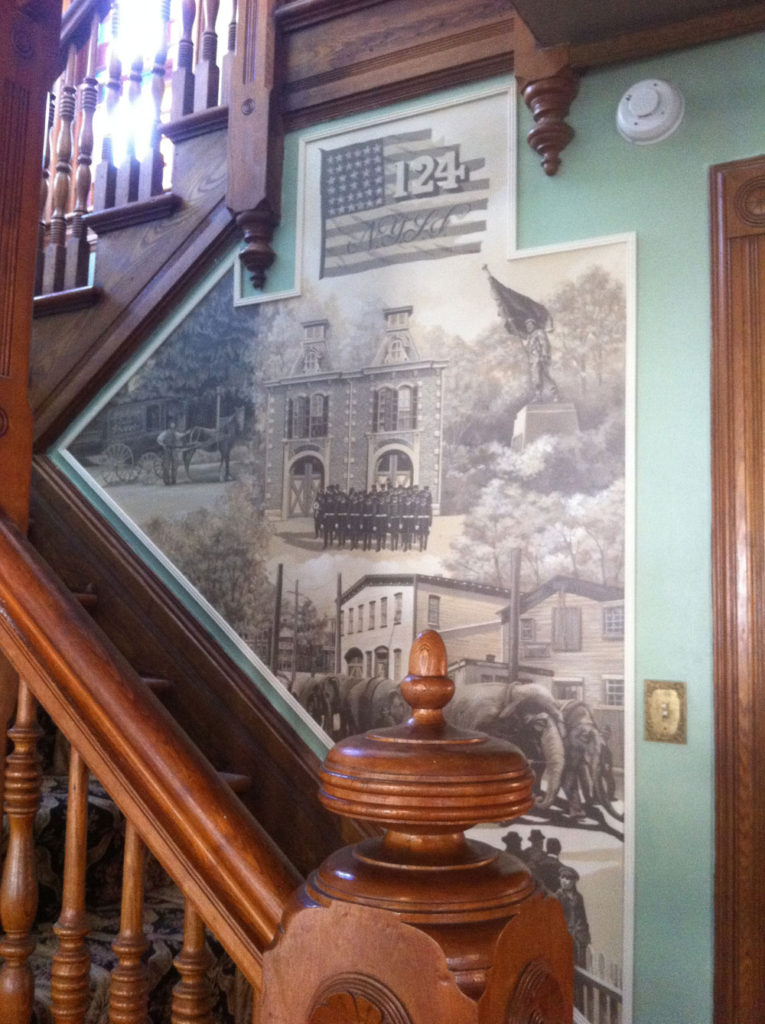 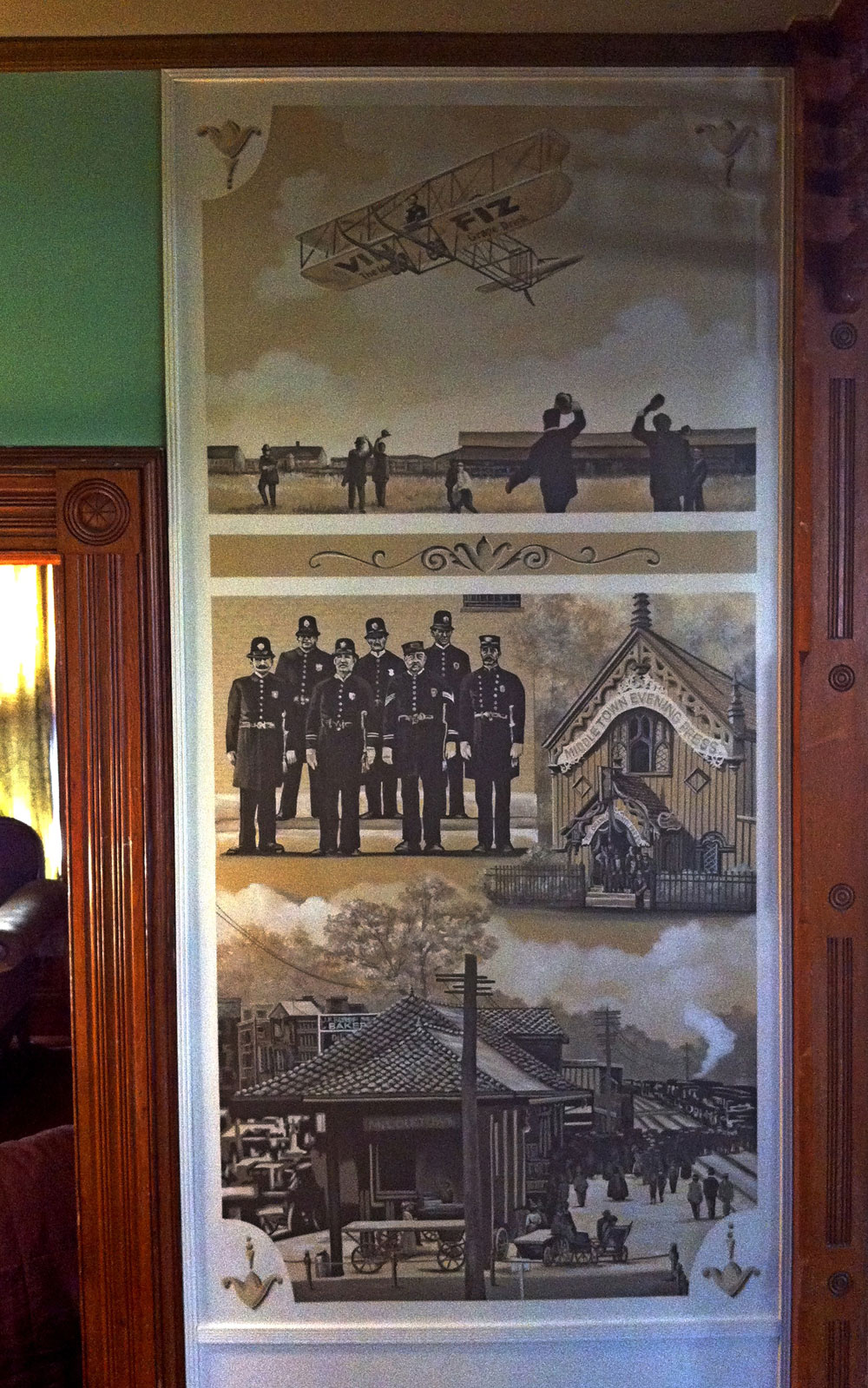 If I’ve captured your curiosity, let’s take a look up close. The first two scenes reflect the owner’s interest in the Civil War. The tattered flag of the 124th Regiment honors the famous Orange Blossom Regiment formed in Middletown in 1862. The statue of a lone soldier salutes the honor of those fallen members of the regiment in nearby Goshen, NY.

Next, a grocer peddles his wares (for cash!) by a horse drawn vehicle in the early 1900s. 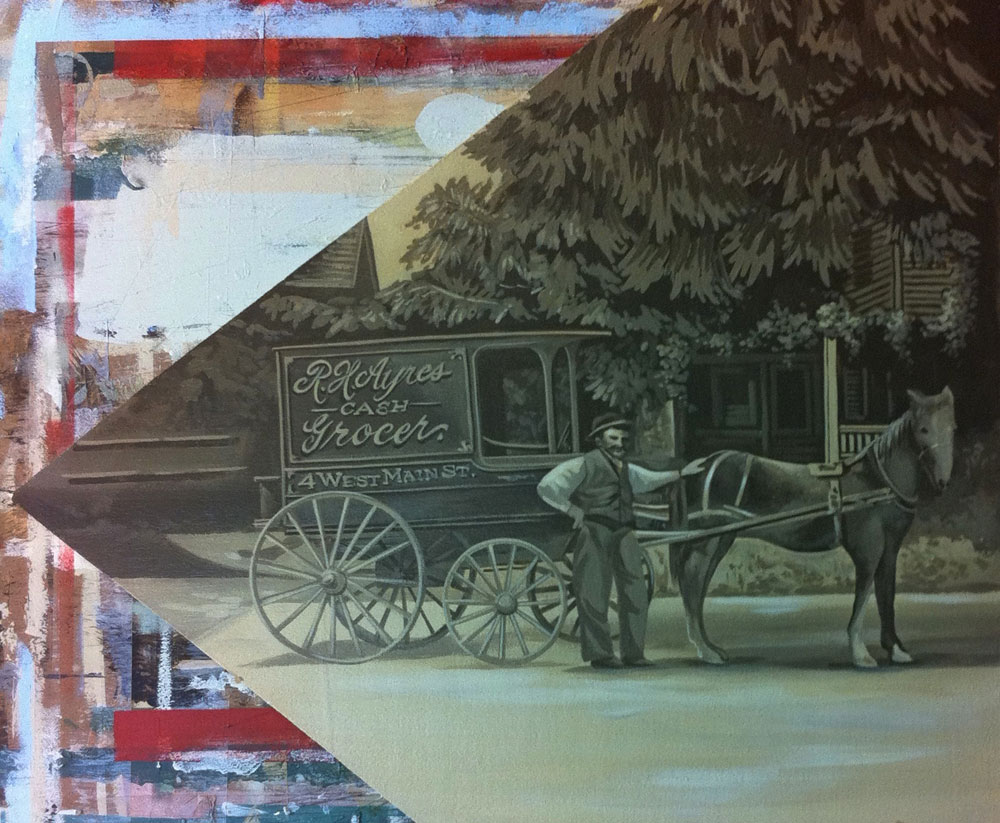 Part of firefighting history, Monhagen Hose #1 is painted as it stood in 1889. 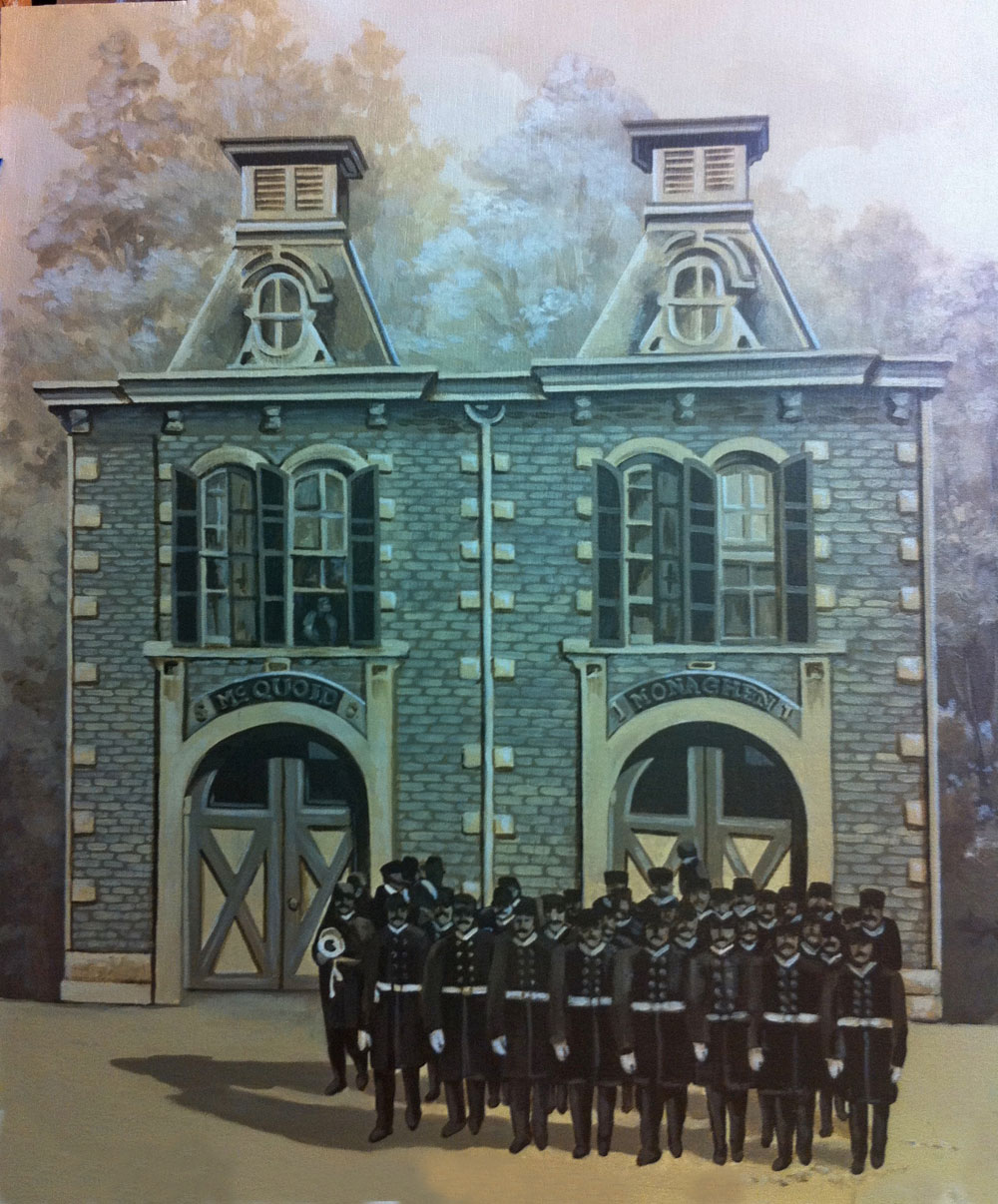 Rounding out the first panel is a nostalgic scene as the fabled Barnum & Bailey circus marches its parade of elephants down Main Street, circa 1901. 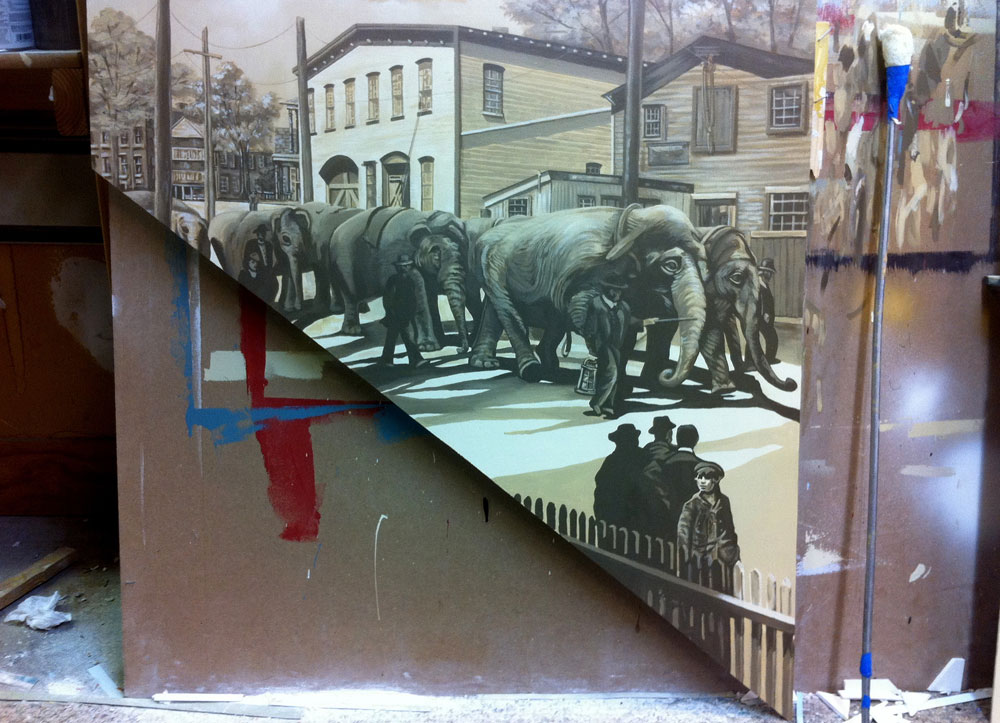 The second panel boasts one of the more obscure figures of aviation history. The owners introduced me to the story of Vin Fiz. The scene shows the arrival of Cal Rodgers on his first stop of his coast to coast flight in Middletown in 1911 after taking off from Sheepshead Bay, NY. If you look closely, you’ll see the smoke of his ever present cigar. With only 90 minutes of flight training after purchasing his plane from the Wright Brothers, Rodgers undertook this challenge in an attempt to win a $50,000 prize offered by William Randall Hearst. He was sponsored by Chicago meat packer J. Ogden Armour and his plane was lettered with Armour’s new drink, Vin Fiz. Rodgers flew with no instruments, maps or navigational aids, following the Vin Fiz railroad cards across the country. History tells us what he lacked in experience (he had only 60 hours of flying time logged at the time of the Vin Fiz flight), he made up for in bravado and charisma. 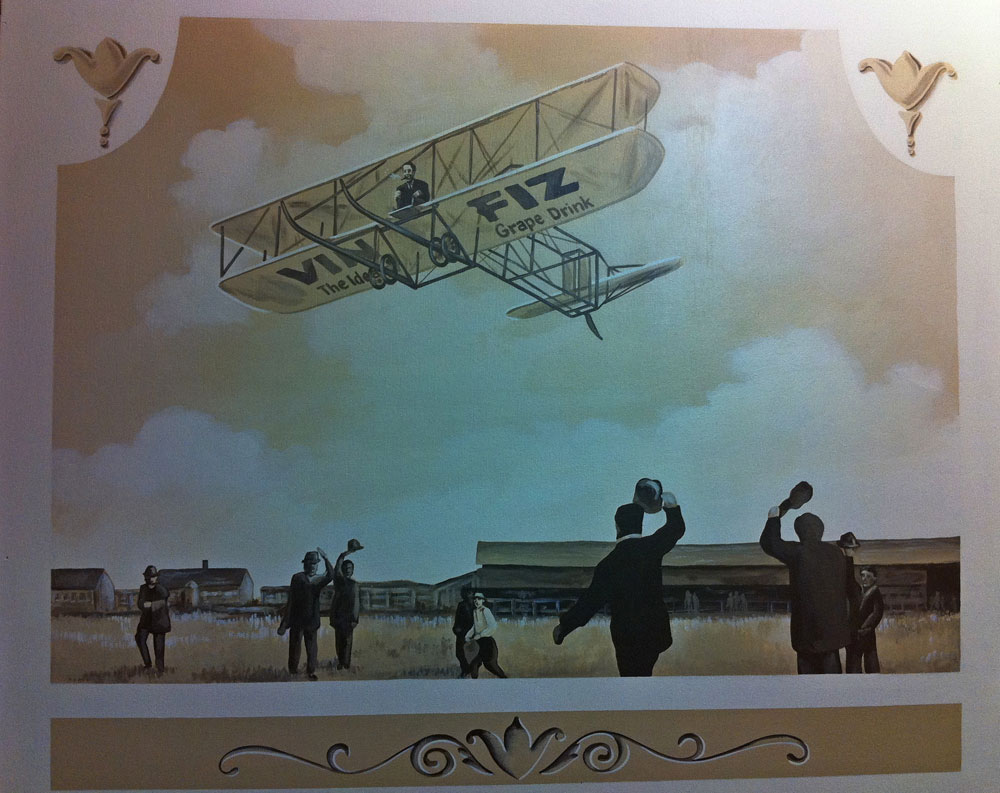 A salute of the police department shows the officers at attention as they appeared in 1915. 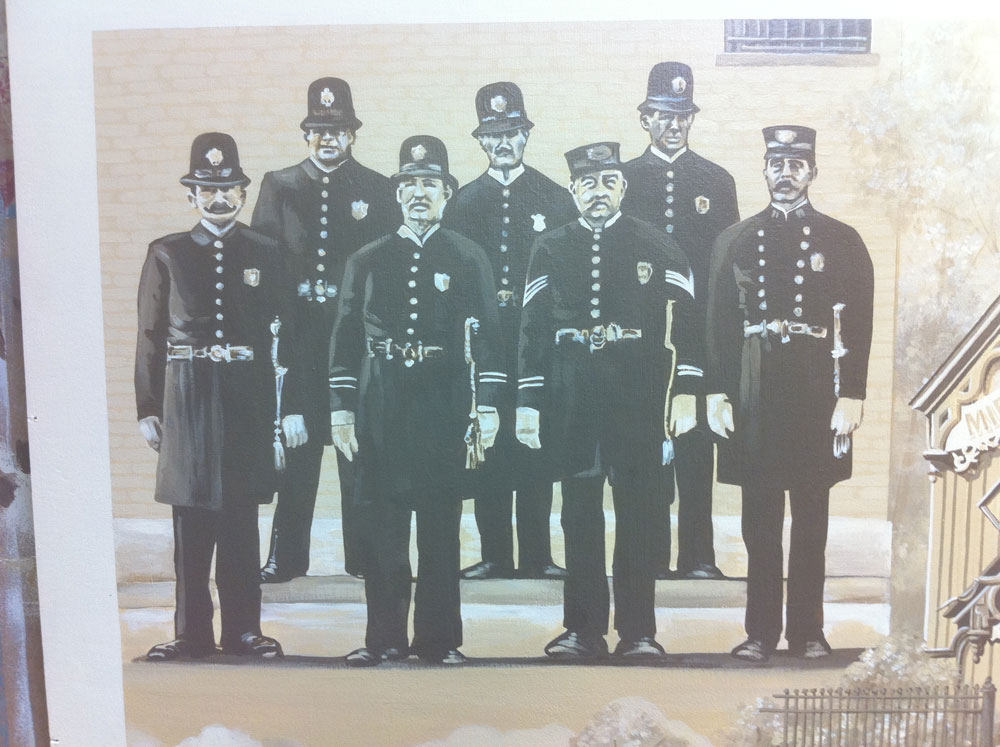 Following, the wonderful gingerbread Victorian trim decorates the home of The Evening Press, which was started in 1870. 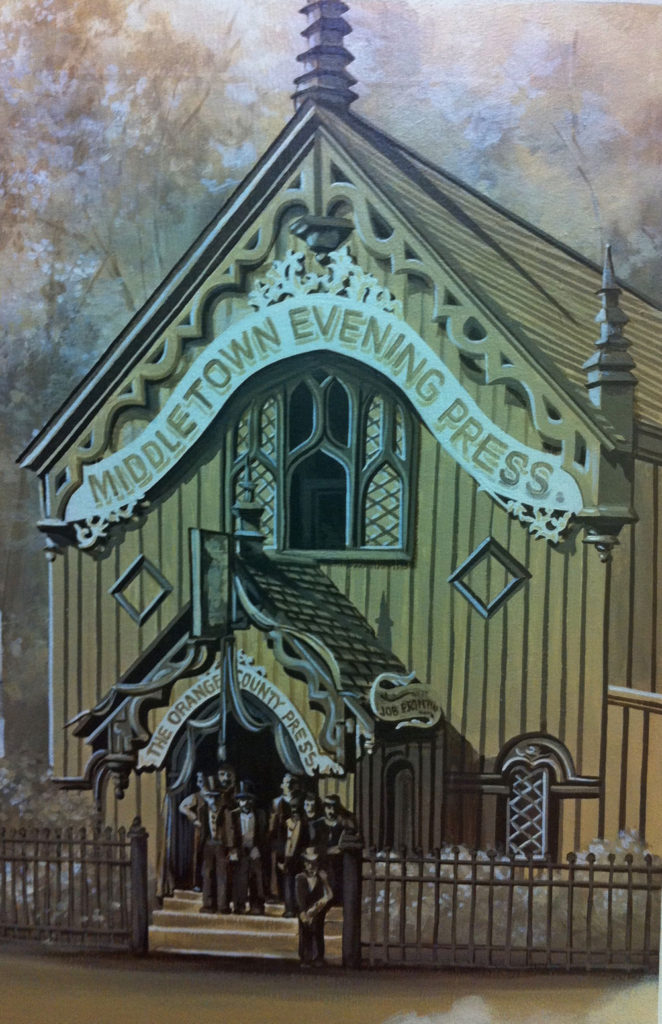 The last scene depicts the Erie Railroad Yard & Depot as it appeared in 1906. 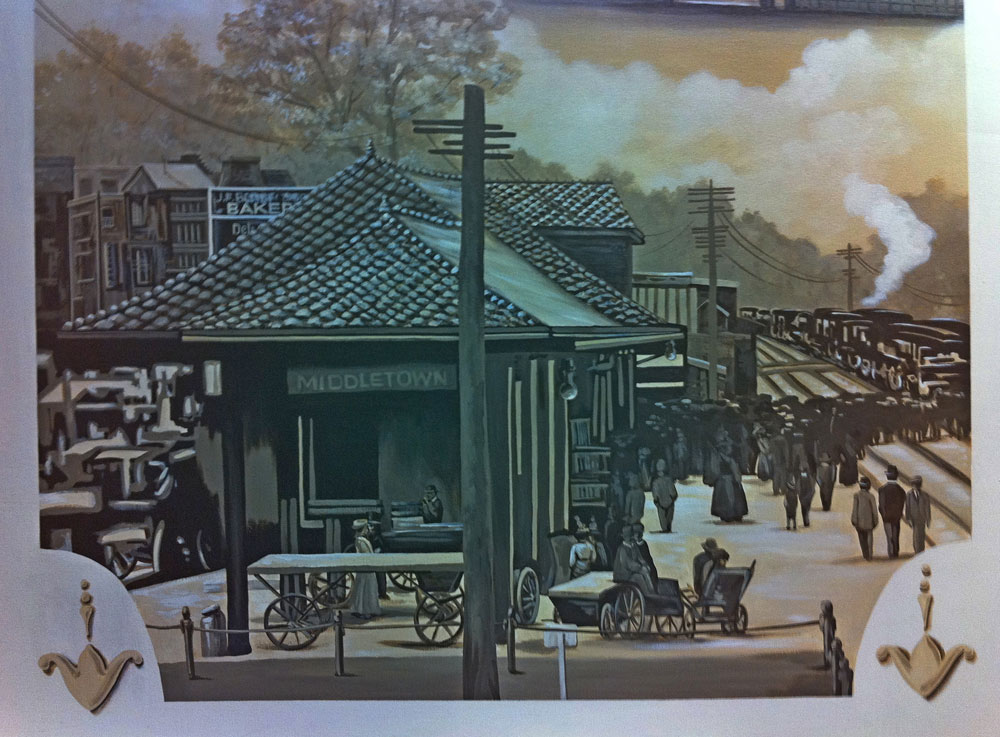 I passed the abandoned yard each time I visited the project site. I am so grateful I have that image from over a hundred years ago tucked in my mind’s eye. The current scene is an old ghost.

Indeed. Each part of this project celebrates the richness of Middletown’s history. My clients’ appreciation of the history brought me to the project. I enjoyed the research. I absolutely love this type of intricate, detailed work and I think my involvement with the subject matter is evident in the finished work.

I hope the background story of this mural hooked you as strongly as it did me. Let me know what you think.