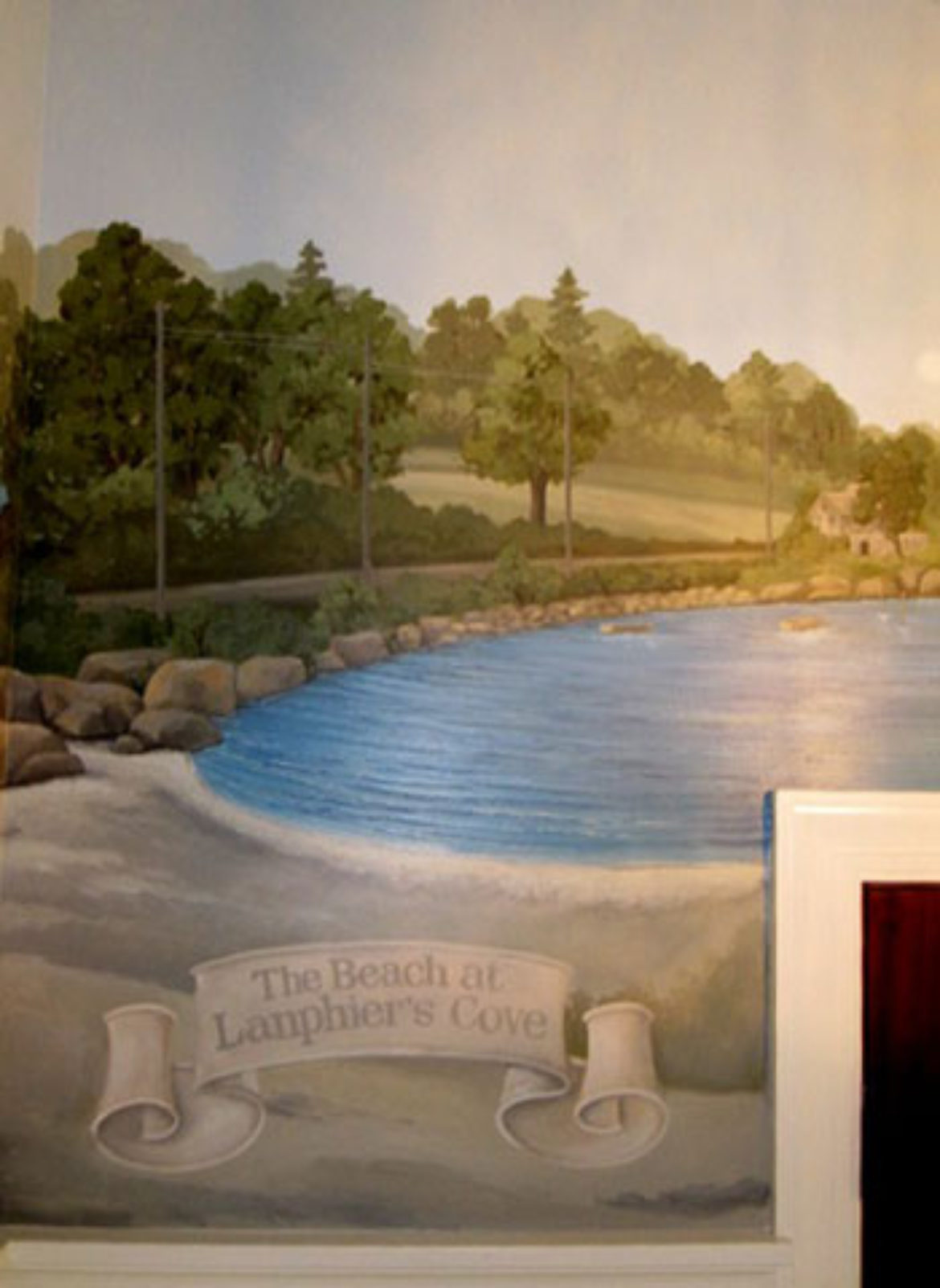 By the sea, by the sea, by the beautiful sea…
The ocean’s call is irresistible to those lucky enough to have spent their childhoods within its sound. And so it was when I first got a phone call from the enormously talented interior designer, Linda Brencher of Linda Brencher Interiors of Branford, Connecticut. She was looking for someone to help realize the vision she had for the foyer of the guest cottage she was designing for her client, who happened to be a friend from childhood.
Uh-oh! Another vision!  I live for those words. But I was not prepared for what I found when I first saw the space. It was small, like 65″x 84″ small. And it had wainscotting up to the six foot point. And a window, and a coat closet, and the front door and the entrance to the kitchen. And a slanted ceiling!  I can’t even be paying attention to my grammar right now, because I am remembering thinking this is crazy.  I had one wall that was just 2 feet tall; the opposite wall rose seven feet from the molding. The remaining two sides were triangular in shape rising from the two foot mark on a 30 degree angle to seven feet. And then she asked: “did I know Lanphier’s Cove in Branford?”
She started showing me a map of the Cove, pointing out various beaches and rock formations. There were photos from the Historical Society of Branford with retro shots of beaches and diving platforms long gone. And she waved toward the ceiling and said: “That’s what I want to happen here”.
And so it did. We walked to some of the beaches, drove to others, with Linda recounting the history each of these places had for her client. Needing to see it from every possible angle, friends were called in to sail the cove with pictures being snapped so I had every nuance I could ask for. And I was hooked.
I’m not sure how I can explain how the solution finally wrapped itself around my mind so that I could connect all the areas and make it read easily. I took a few artistic liberties with the geography, but everyone who’s from the Cove says it is very fluid.

Here is my scaled layout. 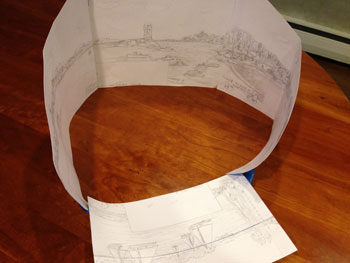 Here are close-ups as I walk you through my little world. The first picture 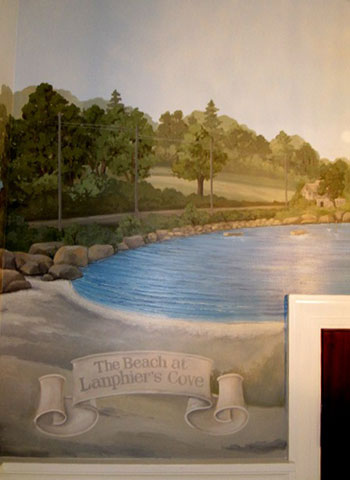 shows the beginning of the beach at Lanphier’s Cove. 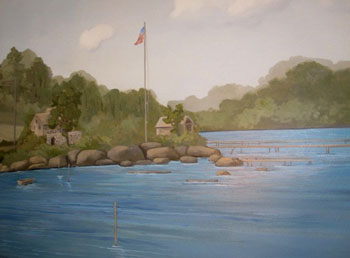 shows the beach stretching to the ocean. There are a few small houses with a flagpole sporting the stars and stripes. 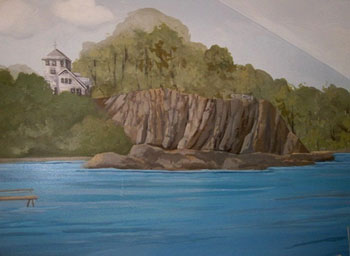 shows the great stretches of rock walls, with the haunted house of childhood whispers peaking out and the remains of a gazebo where many conversations still echo.

We turn the corner 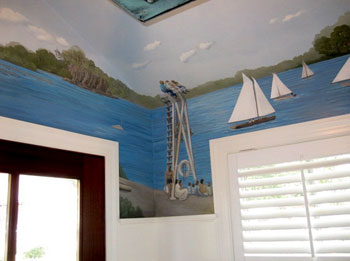 and the foreground shows a diving platform dating back to almost a century ago.

Here is a closeup of the dive platform with the neighborhood children perched on every level. 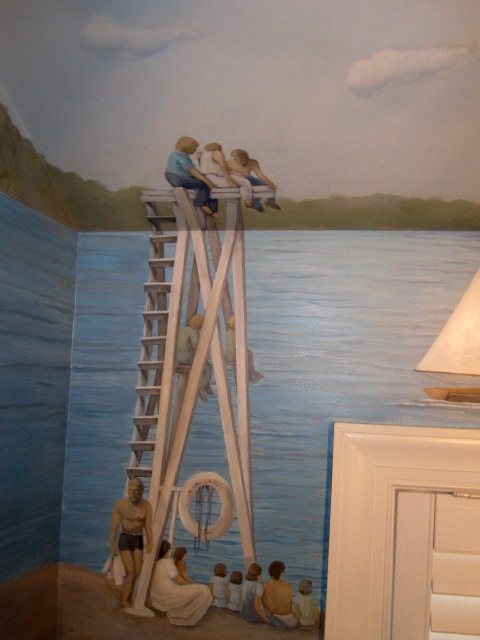 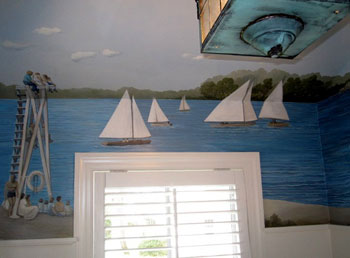 is the parade of sailboats heading out to Branford Harbor. 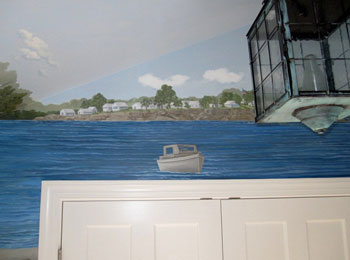 to the tightly packed summer homes. These are friends and neighbors of the client, each one special.

We turn another corner and see the two rock formations known to insiders as “The Mermaids”, 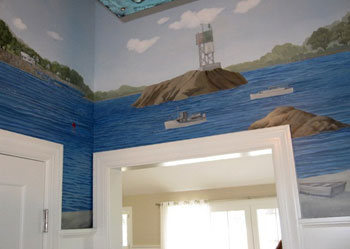 ending with the last corner, back to Branford Beach with the prerequisite lobster pots and dinghies 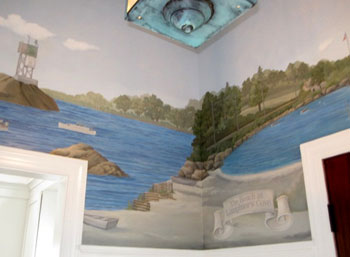 I had a wonderful time painting this project. Despite the awkward challenges such as painting the wall with the diving platform. Part of the painting is on upright wall, but then it hits the ceiling line and the painting continues on a slant going upwards. It’s awkward and straining on the neck, but the challenge of working it out made it all worthwhile.

The best part, I had the opportunity to meet with the owner this past weekend. She was visiting and seeing the mural for the first time in person was a top priority. She was terrific, if I may say so. She waited several hours before she looked at it so we could do so together. We were joined by Linda who first had this “vision” and got to see her reaction.

For me, as an artist, it doesn’t get better than this.

I hope you enjoyed the nuts and bolts of making nostalgic memories come to life.