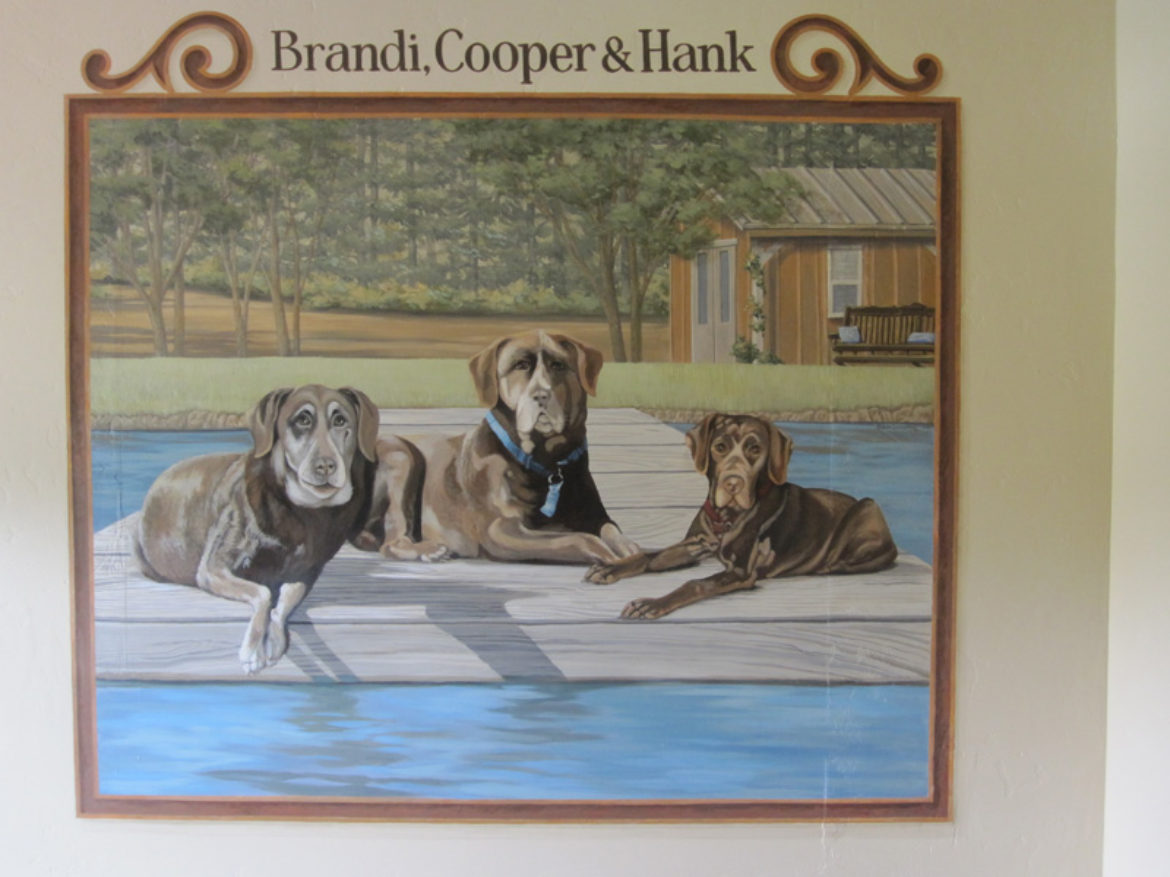 I’ve been asked before do I have a signature style. The answer must be no, because surely all my clients would not be so alike as to want the same style. But what I realized, there is something that I add to a mural whenever the opportunity presents itself. A dog. Yep! I love them, and love when their owners want to make them part of a mural.

Sometimes, it’s simply a mural all about dogs. Like this one in Grapeland, TX which was a combined portrait of three generations of labs.  Brandi, Cooper and Hank, sunning themselves on the dock.

I found it best to have plenty of snacks in my pocket as the dogs checked out my progress.

On the other hand, the dog might become the focus of the mural. In this example, I was painting a headboard directly on the wall because painting it made it possible to match the existing furniture. What was the best part of this project was painting the owner’s beloved Bella to be with her always.

This wine cellar mural has the vineyard as a background for this make a statement portrait of the owner’s dog.

Dogs become such an important part of the owner’s life, that several times I’m asked back to add a new member of the family.

In this picture, this stairwell landing is very much horse themed but the owner’s two dogs were included in the composition.

Years later, a rescue dog joined the family and naturally, needed to be included in the mural.

In another instance, these painting of bookshelves were installed on existing cabinetry.

It was decided that there had to be a place for her two dogs. And of course there was.

There have been other murals where I have tucked in the owner’s pet after observing how special its relationship is to its owner. Here is a full stairway mural view.

Now take a peek of a closeup.

This tiny powder room is filled with images of the gardens of Versailles. Upon request, I added the owners pet when it was completed. The room made it difficult to capture the entire wall, so here’s a look at the wall with the state of Poseidon, a screenshot of video to locate the dog, and then the dog herself.

Lastly, it’s as simple as just a dog on a canvas. Here’s my reference photo, and the finished canvas. I loved capturing her attitude.

Enough ideas to make you think you should be adding your dog picture to your home? I hope so.

Love to hear your thoughts about this.