Once Upon A Time in Bristol, CT 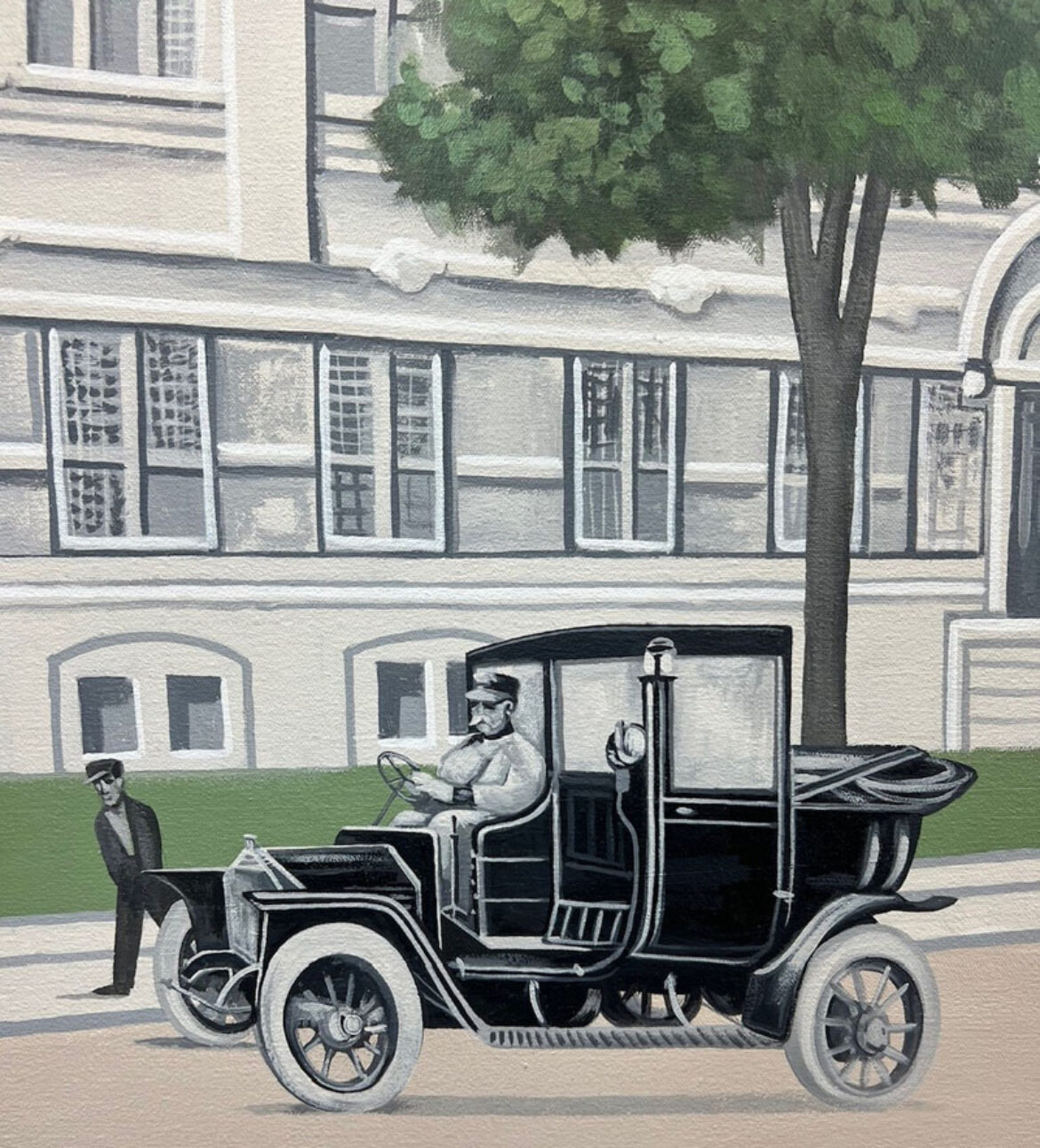 What a ride (taxi cab!) this painting commission has been. I was contacted by the owners of a magnificent building in the somewhat sleepy town of Bristol in Connecticut. I would soon see that what is a town that has escaped the noise of big cities by being located away from major interstates, was in fact, a bustling commercial city in the early 1900s. At that time, it was considered one of the premier clock-making cities in the United States.

A business started by the Rockwell Brothers (the Rockwell Company) would become known as New Departure Manufacturing Company. Not content with their successful cycling venture, they drew up plans for an automobile. The first was produced in 1904. The Roxwell Taxi rolled out of the Bristol plant.

Check out this ad

So the current owners of the building, my client, had an image of a hand colored photo from about the same time. There was no way to enlarge much bigger than a sheet of paper without the image pixelating.

﻿And, that dear readers, is my cue to enter the picture.

We arrived at a size of 48” by 72” on a gallery-wrapped canvas about 2” deep. A few changes to the artwork.

The red car was replaced by artwork on a photo my client had.

Jumping ahead but it’s the perfect place to show my painting of the same.

I needed to stay faithful to the composition and style of the artwork. Although I sometimes use a projector to layout finished artwork, this was too involved to do so. So I used the century old method of a pounce pattern. The drawing is on a piece of paper (in this case, thank you Fedex-Kinkos for the enlargement). A pounce wheel is rolled following all the lines and then charcoal is “pounced” through the holes. I then go over the messy charcoal with a pencil to clean up and dust the charcoal away.

Here’s a look to see the process.

A little mystery to waiting be solved was trying to figure out the name of the Florist in the lower left corner.

We could determine it started with an “A” and had possibly six characters. A phone call (thank you to my cousin Nancy Cavaliere) led to Nancy reaching out to friends who were longtime Bristol residents, and I received a page from the telephone book of 1920. Hilariously called the Phon-o-guide! Business name confirmed!

And painting continued. Here are two progress shots, the first showing the dark shadows being added to bring definition and the second a good closeup of the trees.

And without further ado. It’s done.

I thoroughly enjoyed painting this commission. It was tightly detailed and a great example of trompe l’oeil (creating a 3D image on a flat surface using light and dark values.)

The aim was not for photo realism, but to capture the essence of the postcard that inspired this painting.

I’m happy with the results. A great example that mural artwork can work successfully directly on the wall or as a finished piece of art.

I must admit that it was far more comfortable to paint this in my studio rather than standing on a ladder. Paint solutions? That’s my game. Give me a call if you’re looking for one.