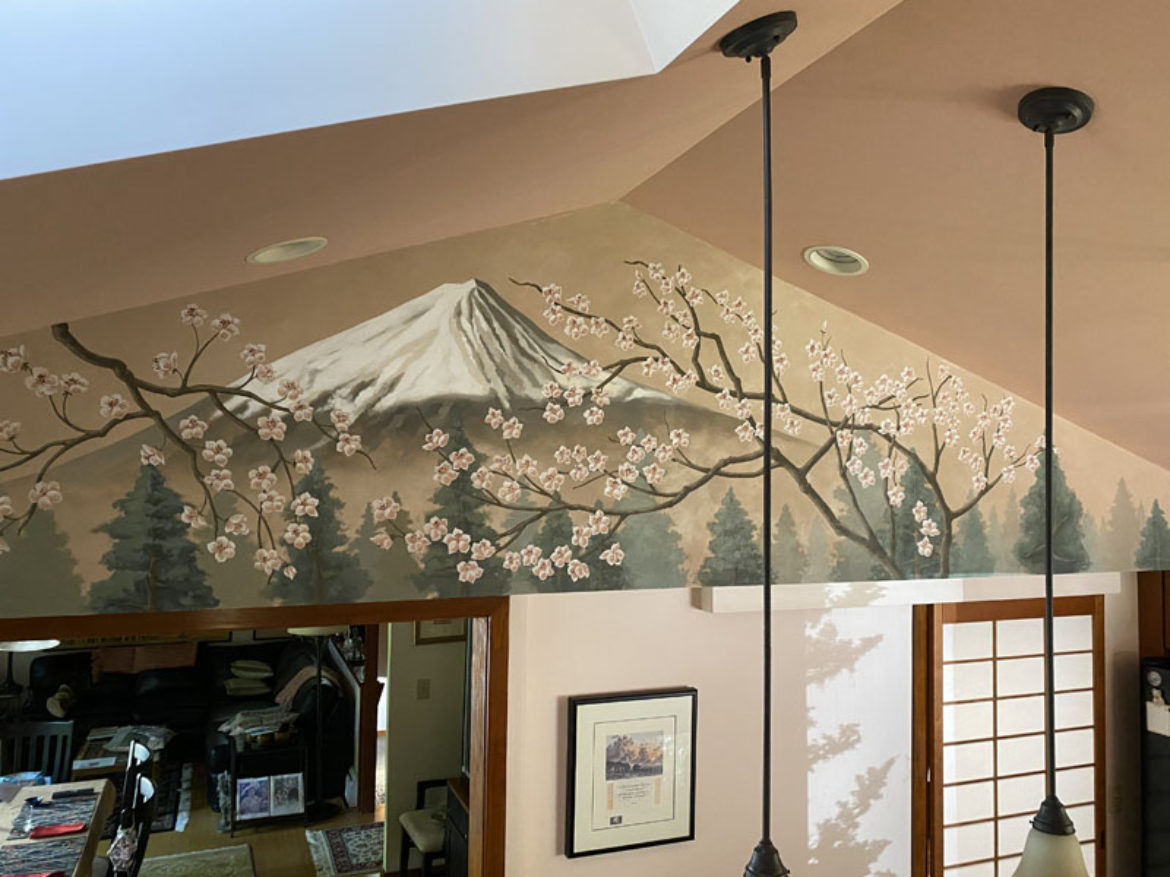 My client played the music of this traditional Japanese folksong while I was painting. It means cherry blossoms. And touches on the deeper meaning of why the cherry blossom is such a revered symbol. They last but such a short time, paying homage to the fleetingness of life.

And so, such a delicate balance, this task. Using such a powerful motif as one of the major elements of this mural. Add in the iconic Mount Fuji and figure this puzzle out in a contemporary home.

The serenity of the architecture embraces you as soon as you see and appreciate the design. Dark wood is balanced by huge banks of windows that deftly bring the simply elegant landscaping into the home.

My task, to design a mural for this long triangular wall in the kitchen. It’s approximately 18′ by 45″.

I find it comfortable for my clients to see my ideas drawn on pictures that have the entire room in them so they are not looking at a drawing in isolation but rather seeing it in relationship and scale to the room. From the start, I saw the backdrop of pine trees that I could see from almost every room in the home being part of the composition. The cherry blossoms were also included from the beginning. Mount Fuji entered the discussion a little later adding its own challenge of such a decidedly triangular graphic fitting into a triangle wall space.

Before painting the mural, I plastered the entire background with Lusterstone, which as its name suggests, has minute particles of mica embedded in the plaster, resulting in a shimmer as light plays on it.

Using lusterstone as a background directed a few changes in laying out the design. I would be unable to sketch it on with charcoal as the charcoal strokes could not be erased. I went back to my signpainting background and used the pounce pattern method. (I’m in good company here. This was used by Michangelo and his contemporaries and still continues today with fellow decorative artists. The pattern is drawn on paper. The design is then rolled over by a small, spiked wheel, the pounce wheel. The paper is then secured to the wall and charcoal is pounced over and through the small holes pierced by the wheel. And Voila, the design is on the wall.

The custom color of the plaster served as a great backdrop for Mount Fuji. Blue skies would not have worked in the space, nor for the palette seen throughout the home.

Once the top of the tree line was done, I started on the foreground cherry blossoms branches. Again, because of the unforgiving nature of the lusterstone, I drew out each blossom with chalk.

I took a little liberty with the color of the blossoms. The truer pink would have been too cool a color. Instead, using the granite on the kitchen island as inspiration, and the peach and muted terra cotta tones found throughout the kitchen, they are slightly more earthy, a blend of raw sienna, burnt sienna and the tiniest touch of alizarin crimson.

And reluctantly, I came to the last blossom. I really haven’t learned emotionally how to cope with the end of painting a mural. I simply don’t want the job to end. I truly get so lost in the painting. But enough, here is what it looked like when completed. Two shots to catch it.

I also have added a small video so you can see the views catching the outside trees. I attempted to put the music of Sakura, sakura as background to the video but even if I could have managed the technological hurdles that presented, I couldn’t get past the copyright infringement issues. If you’re curious, you can google it and do play the cello performance by Julian Lloyd Webber. There many others, but this one is my favorite.

Is there a place you’ve got in your home with a world waiting to be created? I promise to leave when I’m done painting.

Give me a call.