by Sharon Leichsenring· February 10, 2013· in Artwork, Ceiling, Childrens, Floral, Gifts·
Some months when I have to choose what projects to talk about, it’s these little ones that get left undiscovered; small in scope but adding so much to the outcome of the room. This first example started in my head as a simple silhouette of the child with some nice areas of color, taken from the fabrics in the room. However, it seemed as though it demanded a little dimension and the silhouette became a duotone, with the fun twist of the vibrant palette. Got to love that vibrant cobalt blue on a lemon yellow field! The young man is just about life size on this 30″x40″ canvas and to my pleasure, recognized himself immediately. Here is the canvas hung on the wall in his new room. This second example is much more subtle in its approach. Originally this master bedroom had been treated to a soft ochre/yellow sponge treatment by its owner. The tray ceiling which has so much area in the room had been simply painted ceiling white. My part in this project was first to establish a palette, which was derived from the bedding. The tray was then painted in several shades of the chosen blue; the […] Read More 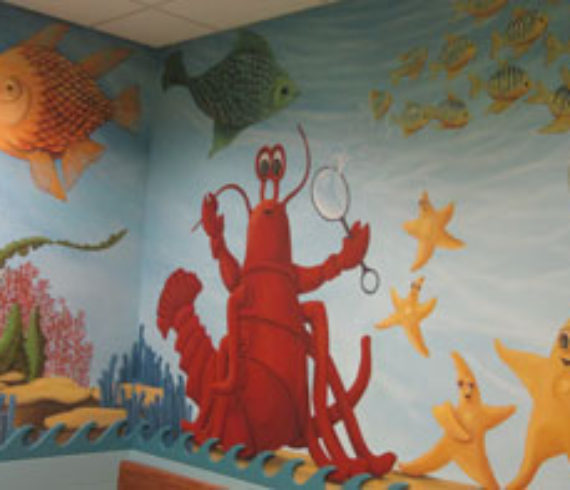 by Sharon Leichsenring· September 06, 2011· in Childrens, Commercial Space, Murals, Ocean·
It’s always an enjoyable project when the words “fun, children and mermaid” are part of its description. I came to do this work through an unexpected path. A client of mine had a situation which required her to bring her child to this Connecticut hospital. First, the best part: her child is fine and received excellent care. What was in need of a little “artistic medical attention” was the play area in pediatrics. My client made a donation to show her appreciation and suggested that I might be the right person for this makeover. Here are pictures of the play area with the artwork in place. The work was done on canvas, and installed much like wallpaper would be handled. By doing this, in the event that the area had to be relocated, the artwork could easily follow. Check out the little details as well. I made a pattern for the “wave” molding that borders the bottom of the mural, which was then cut out of wood.   A subsequent donation enabled the addition of another mural area in the adjacent nurses station. Again, the work was done on canvas. I thought you might be interested in seeing my concept […] Read More